A private institution located in the Museum District of Houston, Rice University was founded in 1912 and is listed in Best Colleges list of National Universities at number seventeen. Students are assigned to one of nine residential colleges upon acceptance, which they will remain members of for the duration of their time at Rice, even if they later choose to move off campus. Rice University has fourteen varsity NCAA Division one teams and is recognized for their baseball program. Students at Rice receive free tickets to all of the varsity athletic events.

The first president of Rice University, Edgar Odell Lovett, chose “a blue still deeper than the Oxford Blue” and “the Confederate gray, enlivened by a tinge of lavender” as the school colors in 1912. There is speculation that the colors were chosen to acknowledge the fact that the founder of Rice University amassed the majority of the fortune that would come to form the initial endowment of the institution by trading with both the South and the North during the Civil War.

The Rice University Fight Song was written by Louis Gerard in 1940. The lyrics of the song are:

The Blue and Gray for Rice today, comes breaking through skies.

Stand and cheer, Vict’ry’s near, Sammy leads the way.

Onward go! to crush the foe, we’ll fight for Blue and Gray.”

The Alma Mater, sung to the tune of “Our Director March,” was written in 1922 by Ben H. Mitchell:

“All for Rice’s Honor, we will fight on.

We will be fighting when this day is done.

And when the dawn comes breaking,

We’ll be fighting on, Rice, for the Gray and Blue.

We will be loyal, to Rice be true.”

The Rice University Mascot, an owl named Sammy, is derived from the owl in the University seal. In the decades since the University’s 1912 inception, mascots have included live Great Horned Owls, students dressed in costumes and, most famously, large statues made of fiberglass and canvas. The first canvas owl was stolen by Rice University’s Southwest Conference football rival Texas A&M, prompting Rice students to pool their money in order to hire a private detective to go to College Station in order to find their mascot. When the detective recovered the canvas owl, he sent a coded telegram that read “Sammy is fairly well and would like to see his parents at eleven o’clock.” From that moment on, the Rice University owl mascot had a given name.

Of the projected Class of 2016, the 479 female students made up 51% of the student body, with the 456 male students comprising the remaining 49%. 22% of the student body is Asian-American, 39% Caucasian, 16% Hispanic, 7% African-American, 5% multi-racial and international students make up 10% of the class. There are no Native American students slated to graduate in 2016. Of the 935 students in the class of 2016, 576 are varsity athletes, 597 are multilingual and 736 are actively involved in community service programs.

Rice University boasts a strong Teacher Education Program, which prepares students to become secondary teachers through the study of educational theory, method course practice and the integration of the two during student teaching periods. There are currently three types of preparation programs for students that wish to become secondary teachers, including the Master of Arts in Teaching, Visiting Post Baccalaureate and Rice Undergraduate Programs.

Because Rice University has a strong reputation for academic excellence and honor code standards, we actively recruit promising students to work as nannies in their free time. Our Rice University nannies are carefully screened, with the needs of your family, your childcare preferences and parenting philosophies taken into account. You can rest assured that every Rice University student childcare provider candidate we present to you has been thoroughly vetted and carefully matched to your individual family before being suggested for your consideration.

If you prefer to choose your own nanny candidate from the student pool at Rice University, we are committed to ensuring that the childcare provider of your choice has been carefully screened and investigated. In order to provide you with the most detailed history and accurate information so that you can make an informed decision regarding the hiring of a caregiver for your children, we do offer full work history, criminal background checks and skill assessment reports before your prospective nanny reports for the first day of work in your home. 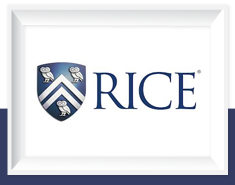