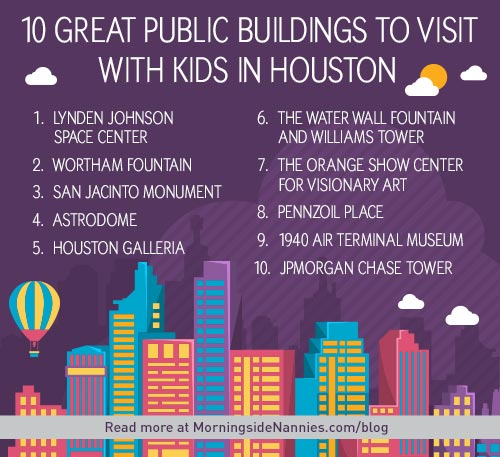 Houston is located in southeast Texas, and has many attractions for families. Named after Sam Houston, the popular general and elected the president of part of Texas in 1836. This historic city is nestled by the Gulf of Mexico and surrounded by four bayous that pass through the city. Although the city is known worldwide as a energy hub, both for oil and natural gas, it also has a teeming culture center that no family should miss. With the coast being so close, there are many natural beaches and adventures to go on with the family, but do not miss the chance to visit some of the top ten buildings and attractions within the city as well.

If you visit Houston during the hot summer months, one attraction that is not to be missed is the Wortham Fountain. Since 1978, the fountain has been a beautiful and refreshing addition to those who pass by the park belt on Allen Parkway. Because of its flowery mist, it has also been referred to as the dandelion fountain.

If you want to really see the lone star of Texas, you need to see the San Jacinto Monument. The National Historic Landmark located in the vicinity of Deer Park, Texas is adorned with the state’s symbol. The observation deck offers a phenomenal view of the city, with a 567-foot column that is topped with the infamous lone star symbol.

The Astrodome, which sports fans of the older variety may know under it’s previous title of the Houston Astrodome, has the notoriety of being the first domed stadium in the United States. It was even named the “Eighth Wonder of the World” in 1965 and was the basis for many domed arenas to come. It has been home to the Houston Astros baseball team, the Houston Oilers football, site of the Bluebonnet Bowl, and as well as many other sports events. A great attraction for any sports loving family to visit.

Built in 1970 and with many subsequent additions over the years ,the Galleria is now over 2.4 million square feet. With over 350 all overlooking the skating rink, the Houston Galleria is an amazing feat in shopping architecture.

Fountains are always something spectacular to observe, and the Water Wall Fountain with its multi-storied water wall is a popular place for tourists and locals to enjoy and take photos. With the 64-story Williams Tower that rises over 900 feet and is the 4th tallest skyscraper in the state of Texas, this is one public location in the Houston area that you’ll want to be sure you visit with the entire family.

Oddly enough, this strangely built farmhouse ended up on the U.S. National Register of Historic Places.  Folk art and other eclectic forms of artistic expression make this house a family attraction that helps to inspire a love and appreciation of art in visitors great and small.

With the destruction of the twin towers in New York during the September 11th tragedies, the twin towers in Houston are even more special. The towers were built in 1975 and designed by noted architect Philip Johnson, and can be an optical illusion to some, seeming to be one or two towers, depending on how you observe them.

This museum is actually housed in the original art-deco air terminal. The building itself is interesting to see, and the exhibits inside give a glimpse at aviation history. The museum is located at the current William P. Hobby Airport and should be at the top of your list if there’s an air travel enthusiast in the family.

The JPMorgan Chase Tower is the highest building in Texas, and the 10th tallest building in the United States, so you cannot miss it on the Houston skyline. It was originally known as the Texas Commerce Tower and rises 1,002 feet above sea level.

Houston holds many adventures for all members of the family, young and older alike. Enjoy the time exploring all that this southern city has to offer.