4 Ways to Lose Your Nanny Job

Love your job? Don’t fall victim to these 4 things that could result in you losing it, quicker than you thought. 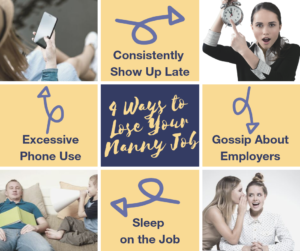 Working parents schedule their nanny’s hours around their work schedule. If nanny is late, that means they are late; and for some employers this can be a real problem. While showing up a few minutes late may not seem like a big deal, when it’s a regular occurrence, those minutes add up. Nannies should arrive with enough time to settle in and be ready to start work at their scheduled start time. Planning to arrive at the time you are scheduled to start work will always keep you running a little late and for some families, a little late is too much. Always build a buffer into your commute to ensure you arrive on time and in the rare instance when something does prevent you from doing so, let your boss know as soon as possible.

2. Use your phone excessively (or at all)

Each family will have their own expectations regarding device usage and what is or is not acceptable. Some families are fine if their nanny uses their devices while the children are sleeping, while others prefer them not to use them at all. Including a written device usage policy in the nanny/family agreement can ensure that everyone is on the same page with expectations. As a general rule of thumb, when nanny is responsible for the children her focus should be on the children. Pro tip: Develop your own personal policy on device use during working hours and share it with your employers. Most will be impressed you are considering the value of your time and the importance of spending it with the kids.

3. Fall asleep on the job

Kids are sleeping, time for a nap right? Wrong. While in some rare instances sleeping on the job may be appropriate, such as when the parents are traveling and the nanny is spending the night, the general practice of nannies sleeping when the kids do, isn’t an acceptable one. Parents who have caught their caregiver napping have been quick to terminate employment, especially when the expectation is that the nanny is alert and ready to render aid if needed.

4. Gossip about your bosses

Sharing your frustration that your boss just bought the newest high tech gadget but hasn’t offered you a raise is okay, right? Especially when among friends. Negative employer talk has a way of finding its way back to employers, either through a nanny telling another nanny who tells her boss who happens to be friends with the employer who is being spoken poorly of or through someone overhearing the conversation and reporting back to the boss. And while venting in “private” online nanny groups may seem safe, never underestimate the damage a shared screen shot can do.

Michelle LaRowe is the executive director of Morningside Nannies, Houston’s award-winning nanny agency, 2004 International Nanny Association Nanny of the Year and the lead educator at NannyTraining.com.

← What to Wear | Why Nannies Should Use Morningside Nannies →