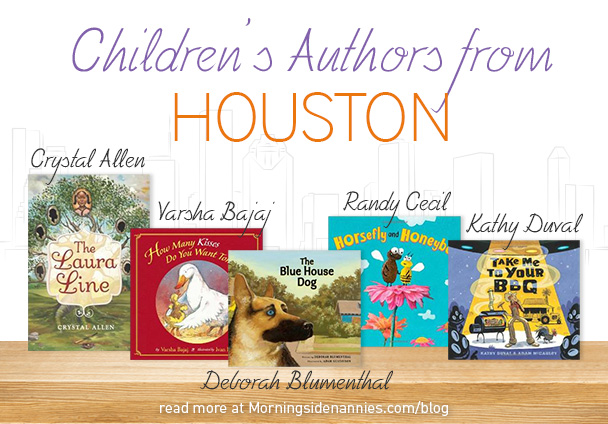 It’s likely your children have a favorite book that they want to read or have you read over and over again. While enjoying the rhymes, illustrations and story plots, what your children may not know is that many of these authors hail from the same city – Houston.

For your reading enjoyment, check out the publications of these Houston authors – known for delivering insightful stories, lessons and illustrations to delight readers young and old.

As an author dedicated to writing books for middle-school children, Houston’s own Crystal Allen delivers.

Her book “The Laura Line” explores the life of 13-year old Laura Dyson who wants to be accepted by her classmates and more importantly, to be noticed by the school’s baseball star. Throughout the book, Laura is faced with decisions to figure out what is truly important to her. Crystal Allen offers a funny and touching story of Laura’s path in figuring out who she is and what she wants out of life.

Also the author of “How Lamar’s Bad Prank Won a Bubba Sized Trophy,” Allen depicts the story of 13-year old Lamar Washington, who is an expert bowler, yet not so keen with the girls. During this middle school tale, Lamar spends his summer trying to change his image while making mistakes he can learn from every step of the way.

Houston-based author Varsha Bajaj knows what it is like to be far away from home, hailing from Mumbai, India. As a counselor turned author, Bajaj turned her experiences traveling to the United States into lessons for young readers to enjoy with a variety of books for children and teens.

Her book, “How Many Kisses Do You Want Tonight?” explores the previous story of baby animals anticipating good-night kisses as nighttime falls. Each creature counts the number of kisses from the parents and show the beauty of bedtime rituals.

“T is for Taj Mahal: An India Alphabet” showcases the exotic treasures of India – from the grandeur of the Himalaya Mountains to the urban city of Calcutta. The book explores cultural differences and showcases traditional meals and customs throughout the streets of Mumbai.

In her debut teen novel “Abby Spencer Goes to Bollywood,” Bajaj focuses on one teenager’s quest for excitement and search for her father. While struggling with loyalty to her family, the main character realizes that something in her life is missing. When Abby discovers her father lives in India, her mom decides it is time for the teen to meet her father and the adventure begins.

A former resident of Houston who now lives in New York City, Deborah Blumenthal has published a variety of young adult and children’s books with creative illustrations and lessons for your children.

Among the most popular of her children’s books is “The Blue House Dog.” The book explores the journey and struggles of a stray dog who wanders the streets after his owner has died. A young boy takes an interest in the dog and begins to care for him, ultimately forming a bond between the boy and the dog known as “Bones.”

“Black Diamond and Blake” is another popular children’s book by Blumenthal. In this story, a prize racehorse is sold to a prison horse-care program after suffering an injury that eliminates him from competition. Black Diamond gets a second chance at happiness when he forms a bond with an inmate who cares for him. The story focuses on defining the meaning of home for this horse and the inmate.

Houston-based author Randy Cecil has been writing since he can remember. After sending off his first manuscript at the age of eight, Cecil has since published several children’s books with illustrations that delight both the young and old.

“Horsefly and Honeybee” was written and illustrated by Cecil. This children’s book explores the trouble that ensues when Honeybee decides to take a nap in the same flower as Horsefly. After quarrels about sharing and a separation, the two soon meet again and must find a way to work together when caught in a dangerous situation.

“One Dark and Dreadful Night” is a mysterious and comical tale of Maestro Von Haughty’s quest to directs a theater company consisting of ragtag orphans uninterested in the gloomy play he is tasked to direct. When the spirited orphans take over the stage on a quest to find happiness in a dark tale, mayhem ensues.

Houston-based author Kathy Duval shows her love of Texas in her children’s book “Take Me to Your BBQ.” The funny tale showcases the best of Texas by detailing the experiences of aliens who have landed on Willy’s farm. The rhyming book takes readers through square dances, fiddle performances and of course, a barbecue.

Also the author of “The Three Bears’ Christmas,” Duval unravels the mystery of who has eaten the gingerbread cookies, sat in their chairs and slept in their beds, too. The follow-up children’s book, “The Three Bears’ Halloween,” takes the bears on an adventure into a scary house while trick-or-treating. Baby Bear is in for a Halloween trick with this cute tale.