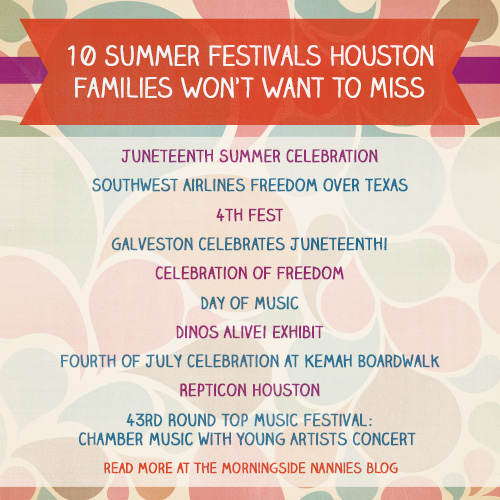 When the school year ends and summer clothing comes out of winter storage, the long days and warm nights make staying inside feel almost like a crime. For residents of the Houston area or lucky vacationers, the possibilities for outdoor summer entertainment are almost endless. These ten seasonal events are among the most exciting in the area, and are sure to rank high on your “can’t-miss” list of summer 2013!

Commemorating the signing of the Emancipation Proclamation is an important part of African American culture, and the celebration held by the Texas Black Expo is one of their most popular each year. With more than 20,000 attendees expected, Juneteenth Summer Celebration is a way to celebrate the seasonal delights of summer while remembering the struggles and triumphs of African American culture.

An annual celebration of American independence, the Southwest Airlines Freedom Over Texas event is the official Fourth of July festival of the city of Houston. With an eye-popping fireworks display after dark and plenty of fun to be had during the light of day, this is one festival that your family certainly won’t want to skip.

If you’re not wild about the idea of fighting the crowds in Houston for the Southwest Airlines Freedom Over Texas festival, Pasadena 4th Fest might be right up your family’s alley. While it’s a bit smaller and more intimate than the Houston event with more manageable crowds, it’s still the biggest city-sponsored event in the suburb of Pasadena. Games, toys, a kidzone and the water balloon war zone make it a great stop for the kids in your family, while adults will enjoy the BBQ cook-off, live music and car show. The big event culminates in a twenty minute fireworks show, sure to please adults and kids alike.

Want to celebrate Juneteenth in the place where it all began? Juneteeth was established as a holiday in Galveston, which is heavily celebrated in the form of a festival that stretches from June eighth through the nineteenth in this island town just a short drive from the Houston city limits.

Slip outside of Houston to celebrate Independence day with this Pearland festival, which features vendors, the Texas Unlimited band, a VFW military salute and a breathtaking fireworks show after dark.

On July 13th, the Houston Symphony will present a free, all-day festival celebrating the sounds of Texas music with five stages housing thirty performances over twelve full hours. The Instrument Petting Zoo allows kids and adults to get up close and personal with a musical insturment, while instrument-making craft activities help you create your own musical devices.

When Moody Gardens hosts a festival celebrating all things dinosaur, they do it right! From May through August, Moody Gardens will be taken over by prehistoric wonders of all shapes and sizes. Sure to please the dino-crazy kids in your family, Dinos Alive! puts visitors in the thick of the excitement with mock search-and-rescue activities along the way.

Live music and fireworks over Galveston Bay make Kemah boardwalk another exciting Independence Day festival celebration option for visitors and Houston residents alike. If one night of fireworks isn’t enough to satisfy, Kemah Boardwalk will continue to host Fireworks Fridays throughout the month of July.

If your youngsters are wild for all things creepy and crawly, Pasadena Convention Center and Fairgrounds is the place to be on July sixth and seventh. Reptiles descend upon Pasadena for the weekend, along with their amphibian pals.

On June twentieth, the 43rd Round Top Music Festival: Chamber Music with Young Artists Concert will be held at Round Top Festival Institute. Celebrating the best and the brightest young players in the Houston area, the festival boasts free admission and a children’s concert to get kids interested in music.

Houston is a world-class city with much to offer in the way of cultural pursuits, so keep your eyes peeled for smaller festivals and celebrations in the area that often cater to more specialized tastes.

← Bike Safety: 10 Tips for Cycling in Houston | Great Places to See a Concert With Kids in Houston →