10 Must Try Restaurants in Houston 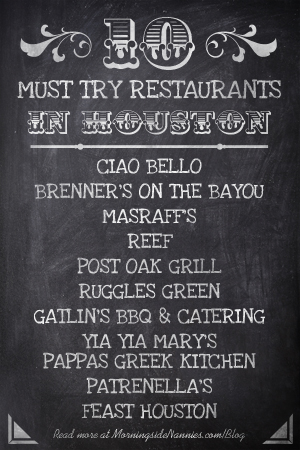 Whether you’re visiting the Houston area for business or pleasure, or you live here, the food in a city with a booming culinary culture is something to be savored. These ten restaurants in and around Houston are only a sampling of the many award-winning favorites available to tourists and locals alike, and serve as a great starting point for an epicurean Texas adventure.

Named one of the “top ten restaurants in the Galleria area” by the Houston Press with accolades from a local restaurant critic claiming that Ciao Bello’s pasta has earned a place among his one hundred favorite Houston dishes, Ciao Bello is a casual Italian eatery offering comfort food to hungry patrons.

2. Brenner’s on the Bayou

Brenner’s Steakhouse is situated on Houston’s Buffalo Bayou, offering an awe-inspiring setting for a perfect dining experience. The two story dining room offers an impressive view and decor that’s elegant without being pretentious or stiff.

Elegance and unassailable service go hand in hand at Masraff’s, a contemporary American restaurant with an upscale menu of delectable items with a new location in the upscale Galleria shopping area. The high-end fare at Masraff’s is on the formal end of the spectrum, so be prepared for a more luxurious atmosphere.

Not only is REEF one of the premier restaurants in Houston; it was also named the Number One Seafood Restaurant in the U.S. by Bon Appetit Magazine, with Chef Bryan Caswell placing among the Top 10 Best New Chefs by Food & Wine Magazine. Consistently named among the best the city of Houston has to offer by local reviewers and critics, REEF is a can’t-miss destination on your culinary tour of Houston.

The Post Oak Grill was established in 1989 and has been at the top of Houstonian foodies’ lists ever since. With three locations in Uptown, Downtown and Sugar Land, you can access high-end dining in a superb setting quickly and easily.

Finding the best barbecue in Houston is like finding the proverbial needle in a haystack, but locals largely swear by Gatlin’s BBQ. A two-time winner of the Houston Press award for Best Barbecue, if you’re looking to experience Texas-style ‘cue at it’s finest, look no further than Gatlin’s.

According to the Houston Press, “although no Greek restaurant in Houston has it all, Yia Yia Mary’s comes the closest.” If you’re looking for exceptional Greek fare in a relaxed atmosphere, Yia Yia Mary’s is the place to be in Houston.

Nestled within a circa-1938 cottage that’s been in the Patrenella family for almost seventy years, the atmosphere at Patrenella’s is decidedly homey and comforting. Named number one among the top ten kitchen garden farm-to-table restaurants in the world by National Geographic, you can’t go wrong with this Old World gem.

An English-style restaurant that firmly espouses nose-to-tail eating that offers adventurous diners the chance to expand their culinary horizons while still providing plenty of hearty fare for those who are less apt to dine on a black pudding or beef tongue. Helmed by two expatriate Brits and an American, there’s no lack of authenticity at Feast, either.

While some of these restaurants are kid-friendly and welcoming to patrons of the pint-sized variety, others may be a bit too stuffy or formal for kids’ tastes. Before you make yourself, your children and your fellow diners miserable, take a moment to consider whether or not a particular choice on your list is something your child would actually enjoy. Unless you’re lucky enough to have the rare adventurous eater on your hands, some fare may simply not be to their liking.